By Matt Stallings December 10, 2009 No Comments 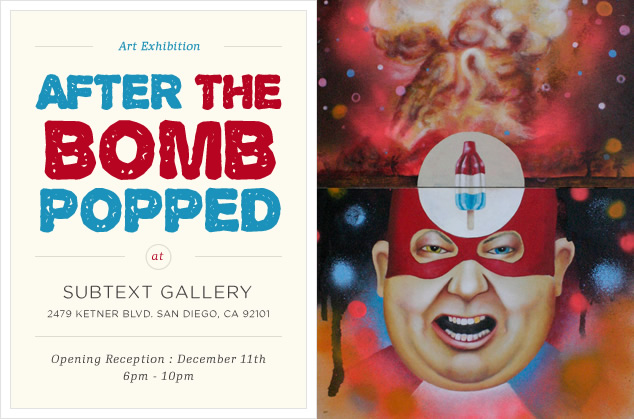 This December, Subtext invites you to come experience a post nuclear world of skewed reality by San Diego’s own Matt Stallings. In After the Bomb Popped, Stallings has conceived an altered world where candy and popsicles have come to life. Icons of pop culture are turned upside down and inside out. Michael Jackson has become a monkey, Mickey Mouse is now a pig, polar bears are hunted for their Icee juice, — there’s even a chocolate Jesus. For his first solo exhibition at Subtext, Matt (interviewed here)has created an all but normal body of pop surrealism at it’s finest.

Hello. I am a graphic designer, creative director, artist, usability creating, web wrangling kind of a guy. Some of my best friends are whiteboards, sketchpads, and my mouse and keyboard. SD transplant since 1997. Husband and father to twins. My passion is to improve life with good design.