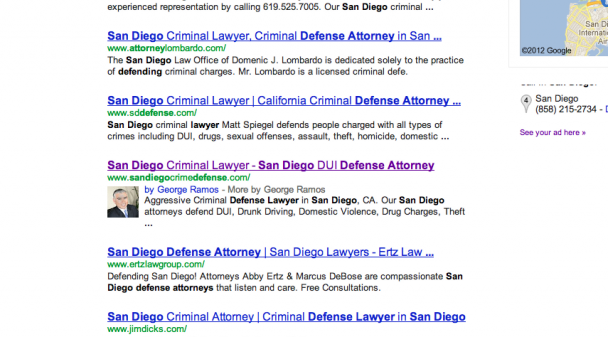 Not too long ago, the search engines announced a uniformed way to make better sense of the content on the web. They called it Schema. The goal was to use a new markup language that would enable website authors to tag their content, a feat that would ultimately help the engines organize and serve up more meaningful results. The engines said Schema was coming and some in the optimization community took notice. About a year had passed since that fateful announcement.. yet Schema seemed like perhaps another crazy concoction. A whole lot of work to do without any tangible result. Schema was literally nowhere to be found except in the code of websites of the early adopters. That is until now.

Lo and behold, we are now starting to see Schema results showing up on the Search Engine Results pages. Look at the example below. George Ramos has a tag line, since he used the rel=”author” tag. He also has a picture, since he has tied in his authorship with his Google + page.  George is using Schema effectively.

If you are unclear on what to do or how to mark up your content, give us a shout. It is still very early in the Schema game and our guess is that as more people see results like George’s, they’ll want to mark up their sites in the same manner. Please note there are literally hundreds of Schema options but the Author tag is the first one we’ve seen hit the search engine results pages.