Use the Force, Young Jedi Padawan!

By Jeromy Stallings January 14, 2009 No Comments 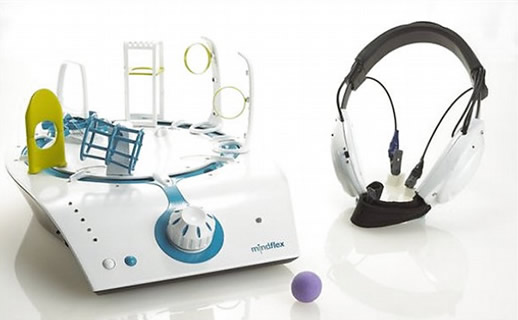 The company NeuroSky plans a revolutionary new “toy” for the Fall 2009 consumer market: The Force Trainer. It’s marketing slant: to train the minds of Young Jedi Knights. Literally. The Force Trainer—expected to be priced at $90 to $100—comes with a headset that uses brain waves to allow players to manipulate a sphere within a clear 10-inch-tall training tower.

The device uses EEG technology. A state of deep concentration is needed to achieve a Force-full effect. “When you concentrate, it activates the training remote,” says Frank Adler of toymaker Uncle Milton Industries, which is creating the Trainer in conjunction with NueroSky. “There is a flow of air that will move the (ball). You can actually feel like you are in a zone.” Star Wars sound effects and audio clips emitted from the base unit “cue you in to progress to the next level (from Padawan to Jedi) or when to move the sphere up or down to keep challenging yourself.”

Grey Hyver of NueroSky recently told USA Today, “Until today, EEG technology has been designed for rigorous medical and clinical applications with little regard to price (and) ease of use.”

The company has also partnered with Mattel to bring out a similar technology-based game, the Mind Flex. “Mind Flex is a game in which the participant wears a headset that scans brainwaves with the hopes of controlling a mousetrap-like board. If the user can concentrate hard enough, they can activate a fan that will push a ball through a series of hoops.”

Such products are a fine example of innovations in technology teaming up with pop culture brands to create new market niches, and using the internet to get the word out. Expect to see more examples of this in 2009 and 2010, and beyond.

Also…we should expect to see EEG and other innovative applications going from mere toys to products that will be of everyday use.

Is the mind-to-Internet keyboard-less interface soon to come?