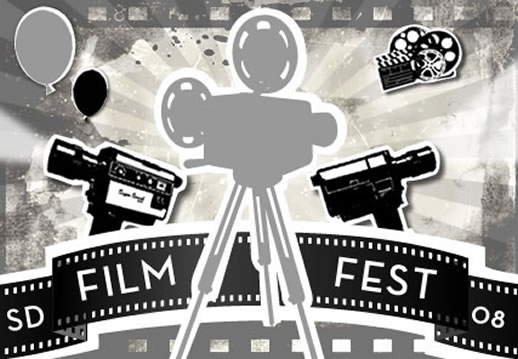 Last month, the San Diego Film Festival held its seventh annual event in the Gaslamp Quarter of downtown. From September 25-28, films from all over the world—and local—were shown at the Pacific Gaslamp Theatre downtown. There were features, dramas, shorts, documentaries, action shorts films, films about the environment and ecology, films about at-risk youth in Australia to a mystical take on the mysterious UFO lights that hovered over Phoenix, Arizona in March, 1997.

The Parties
The SDFF was named, by Chris Gore in The Ultimate Film Festival Survivor Guide, one of the “Top 10 Party Festivals in the US.” This is San Diego, how could it not? San Diego State University was once named, by Playboy Magazine, one of the “top 10 Party Schools in the Country.” The parties at the film festival ranged from low-key events in Horton Plaza, to full on multi-floor extravaganza at the W Hotel with a DJ and free rum and Heineken (one of the festival sponsors, including GQ Magazine, 944 Magazine, and Tommy Bahama run). The awards party was a held at the New Children’s Museum, but closed too early at 11:30, moving the party to The Platinum Gallery, which provided limousines for transport, and free champagne.

The People
Attendees came from all over the world—from the U.K., Australia, Arizona, and New York. They seemed to be a friendly, controlled bunch, with hired GQ models mingling about for drunken eyes to ogle. (This is much like brands that hire models to attend clubs and parties to talk up new merchandise and products, a type of viral marketing campaign that has proven to work. In this case, the models on hand were there to promote the “GQ philosophy of the evolution of the modern man” and Tommy Bahama rum.) Most people turned in around midnight; those that stayed up and drank and danced till 3:00 a.m. were hurting the next morning, and falling asleep during screenings…

The Movies
Here I have to be biased and toot my own horn. I had a film in this year’s SDFF, The Watermelon, shot last summer and now making the festival rounds. For the most part, the screenings went well. We had two. There were minor technical errors during both, but nothing major or to be unexpected. There were only a few walkouts and most people seem to enjoy it, laughing in all the right places. Haven’t sold the film yet, but one scout was there and asked for the DVD, and a sales agent asked for the same. The movie marks quite a journey in my life; it is true that most filmmakers live with their movies for the rest of their lives, and this is the case with me. So far, the journey has been three years: in 2005, I wrote the script for Liv Kellgren and I to make, but that plan didn’t fall through. In 2006, I optioned the script to LightSong Films to make. In 2007, they shot it. In 2008, post-production was completed. What will happen in 2009, 2010, and years after? Who knows.

I didn’t get to see all the movies I wanted to. The Appearance of a Man was an eerie film about a Catholic priest’s struggles with his own sexual desires and the strange, paranormal events surrounding UFO lights over Arizona. If the lights were aliens, where does that leave his religious beliefs? If the lights were a sign from God, what did that mean to him, and why does he desire the love of a married woman, a member of his congregation? I found the film a little slow but fascinating. It won the Heineken Red Star Award and Best Actor Award, fittingly.

The shorts films from San Diego were of best interest. One, “The Day the World Forgot,” based on a Richard Mattheson story, was shot in Ocean Beach, and I recognized the area as I live blocks from it. It was about the end of the world, I think. It was spooky and unnerving. One scene shows a man walking with a small infant into the ocean. Another, “Residue,” which one best San Diego Short Film, was about the secret atrocities the CIA covertly committed in Cambodia in the 1970s, and its residual effects on the world today.

The Need
San Diego needs its brand film festival. There are several small, niche festivals here (San Diego Asian Film Festival, SD Women’s Film Festival, etc.) but this is a big one with international importance and recognition. It puts San Diego on the map as a contributor to cinema arts and culture, adding to the diverse attraction this city has along with the San Diego International Comic-Con, Street Scene, and the Adams Avenue Street Fair. Film Festivals tend to define a city—think Sundance and Park City, Utah, or New York and Tribeca, or even Cannes and France. It will take a few more years for the SDFF to carve itself into the world of cinema arts as an event that people cannot miss. Give it more time, and the Oscars contenders will be fighting for a screening in San Diego the way they do Slamdance, Santa Barbara, or Toronto.