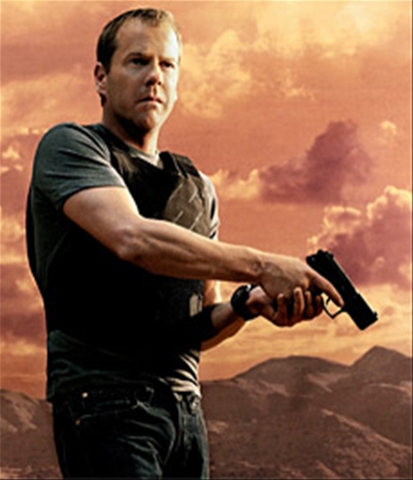 That’s right—after the 2007 Writer’s Guild of America strike stymied production for a 2008  Season Seven of 24, the hit show is back, starting this Sunday, January 11, with two back-to-back episodes, followed by two more on Monday, January 12. After that, 24 is scheduled for new episodes each week. Let’s hope the impending Screen Actor’s Guild strike does not interfere with Jack Bauer’s adventures again!  We know that the cast and crew at Fox are cranking out episodes to reach the 24th in case that happens.

Let’s take a look at how 24 utilizes viral marketing techniques online and what we can learn from their success, how we can apply similar methods to our brands.

One way to promote excitement was the release of the “Director’s Cut” of the 24 movie, Redemption, that included an extras DVD that had the first fifteen minutes of Season Seven’s first episode.  Many consumers purchased the DVD set simply for that alone.

Between Seasons Five and Six, Fox uploaded five minute webisodes that tied the seasons together: the interrogation of Jack Bauer by the Chinese government, and his subsequent de-briefing after he was released — mentions are made of both in the series, but unless you saw the webisodes, you had no idea what they were referring to.  This drove tens of thousands of viewers to the 24 website to watch these webisdoes, which are also available on the season DVDs.

Many TV shows, such as Battlestar Galactica and The Office, have released a series of webisodes that tell a side story, or podcasts and video blogs (vlogs) from characters.  These viral marketing methods keep viewers and consumers coming back to the website for the latest additions; this keeps the shows fresh on their minds.  The shows become relevant to the viewers’ lives.  They remember to tune in for new episodes each week.

Recently, the 24 site has “released” Congressional dossiers and paperwork concerning Jack Bauer’s questionable tactics while working for CTU.  Reading these materials gives viewers a better insight to what is going on, maintains loyalty, relevance, and gives viewers something to talk about and look forward to before the seasons starts to air.

The marketers at Fox know that they must keep viewers guessing and anticipating—the ratings this Sunday are sure to reflect that!  And what comes with high ratings?  More ad revenue from the top brands that want to be seen by 24 watchers.

The question is: how does Jack Bauer always get good cell phone reception, even in remote areas or underground? 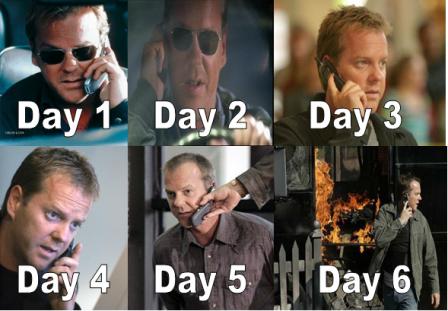 Well, it seems the intelligence agency has its own cell hubs and communication networks to make this possible.

So how does Jack Bauer get from one end of Los Angeles to another in fifteen minutes, when every Angeleno knows that would take an hour?  Well, for Jack Bauer, bending time and space is no problem. Look at what he gets done and how many bad guys he tortures and kills in a single hour!