By Jeromy Stallings September 21, 2009 No Comments 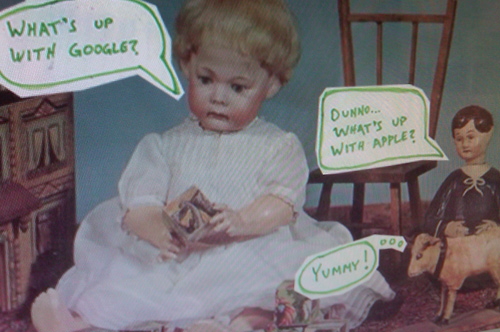 So many of us use one Google feature or another when we get online — from web searches (“Google it” is now part of our popular lexicon), email with Gmail, or the Chrome browser.  Like any big company, Google is embroiled in a number of major issues in trends, the law, and culture, so it’s good to keep abreast of these as they could effect each of us, one way or the other.

Example: the U.S. Dept. of Justice weighed in on Google’s proposed book search settlement with authors and publishers, saying it should be rejected in its current form but that the parties involved should continue ongoing discussions.

From the DOJ: “Because a properly structured settlement agreement in this case offers the potential for important societal benefits, the United States does not want the opportunity or momentum to be lost.”

The latest effort to rejuvenate the flagging display ad market is Google‘s DoubleClick Ad Exchange, an open exchange that enables advertisers to bid on space across a network of sites. The technology is built upon DoubleClick’s proprietary Dynamic Allocation system. The system provides publishers with a real-time reading of what buyers are willing to pay, giving sellers the opportunity to maximize returns on their inventory, while maintaining more control than so-called remnant ad solutions.

Recently, Google made the letter it wrote to the FCC public, revealing its interactions between Apple over the rejection of the Google Voice application for the iPhone.

Google contends that the Google Voice app was rejected because it duplicated certain core functionalities provided by the iPhone. The Google Latitude app was rejected for the same reason – it duplicates functionality of the main mapping app, which was also developed by Google. Apple has maintained that Google Voice was never formally rejected and that discussions regarding its acceptance are still ongoing.