By Jeromy Stallings August 27, 2008 No Comments 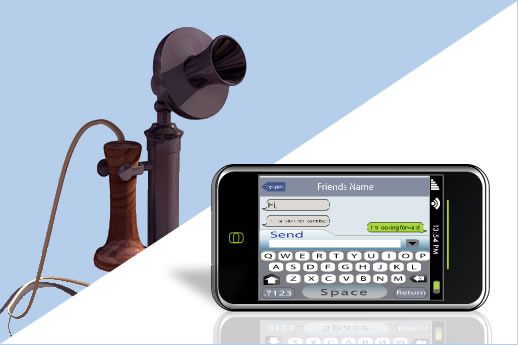 We now live in a digital world where our culture is based on information that is available within seconds of its creation through media outlets, infotainment, and instantaneous access. It’s an exciting time to be here, without a doubt.

The Past vs. the Present
The way information is disseminated to the public 100-200 years ago is incredibly different and has a quicker effect on politics, culture, and business. When Teddy Roosevelt ran against President William Taft 100 years ago, he would say all kinds of horrible things about Taft at rallies and speeches…not that he got away with it, he was criticized and censured as candidates are today, but it took so long for the information to spread through the States that by the time it did,  it didn’t matter — by the time the newspapers were published and got around, it was weeks if not months.  Now, anything a candidate says is recorded and up on YouTube two minutes later, and in less than an hour, the whole world knows of it.

Consider the Civil War, where reporters wrote hour by hour descriptions of battles, but by the time the public read of these battles in newspapers and journals, some time had passed, the battles were long over.  Today, we witness battles as they happen, via traditional news cameras and reporter’s cell phone cameras. Both Gulf Wars have been called “Living Room Wars.” Right now, we can see the conflicts in Georgia and Afghanistan live on our TVs, computer or PDA screens.

There are critics of such instant information, who question whether this is a good or
bad thing.

Know It Now
This is our speed of information, and this information makes up our current digital culture. The real questions are:..do we need to catch up, to adjust, or are we now so adapted to the speed of technology that it is natural?

For those of us who live and work with ever-changing technology on a daily basis, we have adjusted to this way of life.  Our children coming into the world now will automatically become integrated with a culture that did not exist 20 years ago.

Slow It Down
Peter Morville calls this “Speed of Information Architecture.”  He advocates that while we live in a lightening fast age of technology, we need to find a balance, to slow down a little, to spend time with our families, to relax and read a book, to volunteer time to humanitarian causes.

While things are moving fast, we don’t have to become overwhelmed by it; we simply integrate it into our lives in a positive way.

Think about how you can take a break from the excitement of technology advances and information speed, how to relax, and how you can give back to the community that has created possibilities for abundance.