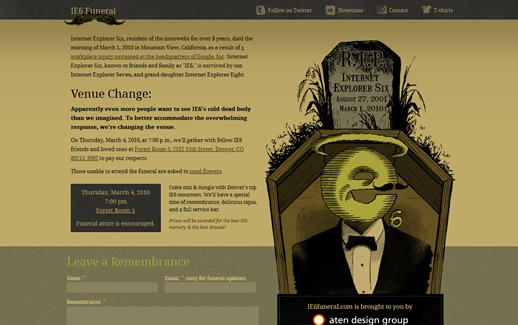 Well done, Aten Design Group of Denver, CO. Well done. As mentioned by CNN, the group is holding a funeral service for Microsoft’s Internet Explorer 6 web browser, tonight. The “death” is a result of Google, specifically its Google Docs and Google Sites, dropping support for IE6 on March 1st. YouTube also will stop catering to it on the 13th.

“Internet Explorer Six, resident of the interwebs for over 8 years, died the morning of March 1, 2010 in Mountain View, California, as a result of a workplace injury sustained at the headquarters of Google, Inc.”