The iPad is Here!

By Jeromy Stallings April 4, 2010 No Comments 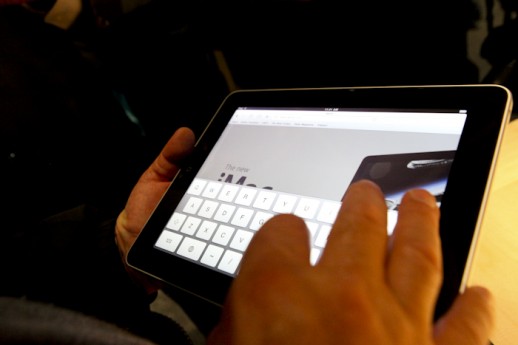 Is it the moment we’ve all been waiting for?

Right before Easter Sunday, Apple launched its golden mobile device, the I-Pad, retailing at $499 to start.

While Apple prepared for the launch, Flash or no Flash, developers and distributors were scrambling to deliver content to what could be a game changing device. CBS and ABC confirmed they are preparing to stream shows to the iPad via the HTML 5 standard. Netflix has an iPad streaming app ready to go, one of 1,000 apps how there just for this new toy.

But for many print publishers, the iPad is a second bite of the Apple, so to speak – a second chance to get readers to pay for digital content. On the video site Hulu, for one, is considering launching a subscription service to stream full-length TV episodes to the 9.7-inch screen device.

It was a busy weekend in the stores. According to Business Week:

Apple Inc. is likely to sell more than twice as many iPads in its debut weekend than some analysts estimated, an early sign that Chief Executive Officer Steve Jobs may succeed at reviving demand for table-style computers.

The reviews are pouring in, pro and con, and the Sunday edition of the New York Times published a nifty article, “How Green is My I-Pad?”

As per FCC regulations, now that the device is on market, photos of its interior machinery and makings can be seen here.

Apple posted a list of popular content sites that will support the iPad’s chosen video standards, including CNN, Vimeo, MLB.com and the NYTimes. Adobe estimates that over 75% of video online runs on Flash.

But Steve Jobs doesn’t like the software – it’s “buggy” he said. So now the company lays down a gauntlet for content creators, forcing them to upgrade to HTML 5 for video, or JavaScript or CSS3 for interactive apps readable on iPad’s Safari browser.

For the $500+ iPad to succeed on a large scale, it has to gain acceptance as the world’s most elegant mobile video delivery device to date and that will ride partly on mass industry adoption of the HTML 5 standard. Perhaps newspaper and magazine publishers should take up a collection to help subsidize the move, because their future may depend on the transition.

But what do we here vat Ninthlink think of the iPad?  First, we welcome all new technology that enhances our lives, especially mobile devices.  As for a “review,” you’ll have to wait and see – we’re bound to talk about it as we play and work with it.